When Corsicana’s new Cotton Patch Cafe opened in 2015, it was bittersweet for then one-year General Manager Jasmine Camarillo. For months she watched the new store being built, which was across the parking lot from the old store. Very soon she’d be leaving the comfort and the memories of her smaller store for the unknown of managing a bigger operation.

As the new store neared completion, Jazmin remembers thinking, “Oh my god… Just throw me in the fire… Here goes the new GM with a small store and now you’re going to give me a bigger store. And I was like wait. Let’s go. Let’s go for it. Corsicana has been asking for a new, bigger and better Cotton Patch. Let’s do it.”

And do it, they did. According to Jazmin, the first three months were amazing. The community turned out and really demonstrated their support and love. They were truly excited to have the new store.

Amid the long hours and stress of opening the new store, Jazmin took it all in stride and kept right on working. She had a restaurant to run, a community to serve and a staff to look after. Shortly after opening, Jazmin remembers being asked if she had any kids.

“Ah, no. I have like forty of them… I feel like the mom here. I’m like Mama Bear. I kinda grab everyone and take them under my arms… I feel like the culture I have developed here is like a legacy. It’s something that I saw as a hostess, as a service manager. It’s definitely a legacy that you stick with if you want it. My parents always showed me love, respect and trust. And then you come into a company that carries on the same things. You respect each other, you love each other, and you trust each other. And that’s something you carry on,” says Jazmin.

Since opening in 2015 a lot has changed. Staff, customers, even a store’s culture is subject to change. But under Jazmin’s leadership, it hasn’t.

“It’s your choice whether you allow it or not. And I never allow my culture to change because I feel like that was the legacy I wanted to carry on. The legacy from the people that were my leaders. People that I looked up to.”

Since 2015, it has been a rollercoaster, according to Jazmin. It’s been great, but it’s also been challenging. For Jazmin, those challenges, provide the opportunity to learn and grow.

“Let’s just learn from the bad, and keep on keeping on,” as Jazmin puts it.

Now, four years later, and a decade into her time at Cotton Patch, it’s a whole new world for Jazmin. She has come incredibly far. From her days as a fulltime student working as a hostess and server at Cotton Patch while holding down a second job, to becoming the GM of the Corsicana store in 2014, one thing has always remained constant. Cotton Patch has always been like home to her.

“This is like a family thing. I have developed a real family bond with Cotton Patch,” says Jazmin.

That bond keeps Jazmin motivated. Throughout her career at Cotton Patch, Jazmin has always been driven to take on more responsibility even when she thought she might not be ready. And at every turn, she rose to the occasion. Today, her goals are pretty simple. Pay it forward; pass on the legacy that was entrusted to her; recognize the potential in others and help them develop.

There is no doubt Jazmin has flourished in her time at Cotton Patch.

In her own words, “I feel like a flower that broke through the concrete and blossomed and wanted to be more.”

She has also learned a tremendous amount.

“The biggest lesson is learning that you are capable of being that one person you didn’t thing you could be,” says Jazmin. “You see someone that you think is a great person, a leader. One day I’m going to grow up and be like him and the next day you wake up and you’re doing everything you didn’t think you were capable of doing, and then you are that person you always looked up to. You challenge yourself to be the better person… To show others that you can do it, too.”

Everyday Jazmin works shoulder-to-shoulder with her staff. She has quite literally walked and worked in many of their shoes… Now they are all working as a family under one roof, following the same path.

“If I did it, we can all do it. You just have to learn to believe in yourself and see you’re capable of doing it,” adds Jazmin.

Jazmin not only believes that, she lives it. She was on her own at 18. She got married at twenty-two. At twenty-three she purchased her own home. And today she has an amazing a career at Cotton Patch.

When asked about the future, Jazmin sees herself learning new methods of making her store better and learning how to help people around her grow.

This year marks Jazmin’s tenth with Cotton Patch and after nearly a decade, it’s never a struggle for her to come to work. Her can-do attitude; that desire to do whatever it takes to make her store, her people and herself better, continues to drive her forward.

When you meet Jazmin, it’s evident she loves her job. Cotton Patch is home to Jazmin. If you ask her, she’ll probably say she never wants to leave; that she just wants to make her store and her people better, continue cultivating a culture of love, respect and trust, and maintain a family environment. And that’s exactly what she does, every day, even if that home is a whole new world just across the parking lot.

Sometimes, where you are isn’t where you are meant to be. Even if that place is secure and comfortable. After spending nearly ten years working for a Big Box Retailer, I knew it was time for a change. Although I had worked my way through various positions, into leadership roles and worked alongside some amazing people, I felt that something was missing. I was going through the motions and did not find a meaningful connection with what I was doing. I wanted to do more for employees and have a bigger impact on the organization.

So, after a decade with one company, I began to search for a new opportunity. I came across Cotton Patch Cafe and it seemed like a good company to work for. Although I had never worked in the restaurant industry, I was very intrigued. The concept drew me in with its small town, family appeal. There happened to be an opening for an Office Administrator in the corporate office. The position was only part time but after some research, I decided to apply. Yes, it was a risk. I mean, if I got it, I’d be leaving a secure job at a successful company for an unknown future in an industry I knew nothing about. Well, I was offered the job and I accepted. Crazy, right? It was a leap of faith, for sure. But, something told me it would be worth it.

I was only there for two months when I got promoted to full time Office Administrator. I was enjoying the work and loved getting to know my fellow employees. During those first few months, I decided I wanted to work in HR. At the time, it was a department of one. I figured that would change as the company grew and that there might be an opportunity for me to work more directly with employees. So, I asked about working in HR. I wasn’t immediately given a defined role, but I began to help out with some departmental administrative duties. As I lent my assistance, I continued to absorb more responsibilities. A few month later, I was officially promoted to HR Benefits Administrator.

It was then, I knew I had made a good decision in coming to Cotton Patch. My hard work and dedication was being recognized!

Soon after, I began working with a great leader that introduced me to Recruiting. I began assisting in this new role and found a great sense of accomplishment in helping people find their careers at Cotton Patch. I was getting involved in the full spectrum of the employee experience. It was interesting and challenging work.

Over the next couple of years, the HR department continued to expand, and we went through a few departmental leadership changes. In that time, I got even more involved and continued to take on new responsibilities. I felt like I was learning and growing daily. I learned and worked with digital job boards, online recruiting tools and even began to expand into social media. It was exciting and added more satisfaction to my job.

When our current Head of Human Resources, Rachael Kelly-Marcus came aboard, the department really began to take off. She immediately helped to focus and streamline our people operations—we’ve become much more efficient and a specialized department. She’s challenged the team and in doing so has given us opportunity to grow in our roles.

Since coming to Cotton Patch, I have seen my role evolve and change. I have gone from being a part time Office Administrator, to full time Benefits Admin, to Recruiting Manager, HR Benefits Manager overseeing warehouse operations, and now- People Operations Manager. At each stage, I have grown both professionally and personally.

Today, as a group our department really focuses on the things that have significant positive impact on Cotton Patch employees—a great employee experience. For me, that means being a resource for all our employees, working on employee issues, and offering solutions to those issues. It is my goal to make every employee’s job easier and more enjoyable. I have also been fortunate to have the opportunity to get to know our management and restaurant staff members at our corporate office and across our locations in various states. I’ve been able to develop close relationships with many of my colleagues, and they know I am here for them. They are my customers and I take great pride in helping them on a daily basis.

March 4th of this year was my four-year anniversary at Cotton Patch Cafe. I have learned and grown so much since I came to work here. One of the biggest lessons I have learned is accountability. I am accountable for upholding the duties of my position, taking the action necessary to stay on track with my current responsibilities and striving to grow professionally. All that translates into my primary focus of being accountable to all our employees, and really being equipped to help them in any way I can, whenever they need assistance.

It’s an exciting time to be working at Cotton Patch, especially for me as we continue to focus on making the company and the employee experience the best it can be. The relationships I have developed here are very important to me. I wouldn’t trade them for anything. I enjoy coming to work each day and look forward to being part of the Cotton Patch family for many years to come.

So, yes #FeelsLikeFamily really is how it feels to me at Cotton Patch Cafe. I know that won’t change. In fact, I think we will only become closer as a family as Cotton Patch continues to grow. Maybe it’s time for a new hashtag. I think #WeAreFamily is where we are headed. And I can’t wait to see where that leads the entire CPC Team.

Maria Gallegos is People Operations Manager at Cotton Patch Cafe. She celebrated her 4th anniversary with the company on March 4th of this year. 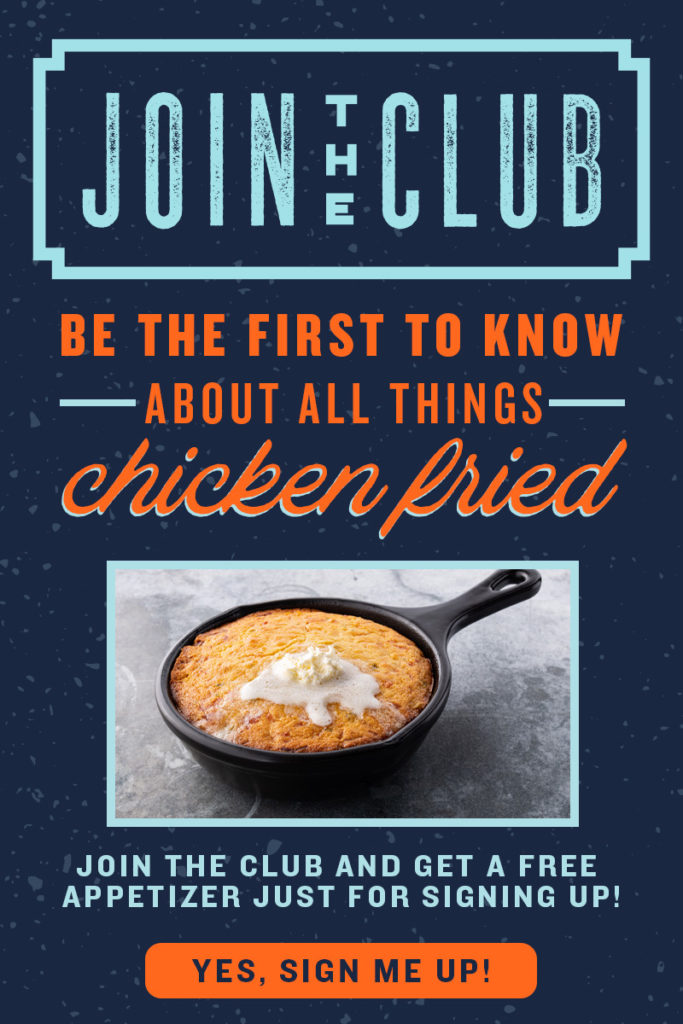